As far back as I can remember,

my first love for sandwiches began in middle school. Freddie’s Sandwiches, the little sandwich shop that could situated on the corner of Francisco Street in San Francisco.

Across the street, from which I hail at least once a week, is Francisco Middle School. My allowance was $2.00. Enough to buy me a six-inch salami with Swiss cheese sandwich with a slobbered amount of mustard & mayo on a sour dough bread, and a can of coke to boot. Total price $1.50. I was a happy camper.
When high school came around in the late ’80s, it was all about Little Lucca’s. Another hole-in-wall sandwich dive on El Camino Real in South San Francisco. My friends and I would go there after school to buy our ‘usual’. Mine was the Lucca’s Combo (mortadella, provolone, salami) on a Dutch crunch with everything. Believe you me, I did not hold out on any condiments. One cannot have a Little Lucca sammich without their infamous original garlic and hot pepper sauce in it. To this day, when in town, I make a point of purchasing a pint of each sauce so I can mimic their sandwiches at home. By the way, my latest craze at Little Lucca’s is the Lucca’s Spicy Buffalo.  One word  YUM.

Forwarding now to many years later beyond my youth–in the mid 2000’s, my palette’s curiosity discovered the muffuletta spread whilst residing in Placerville from a quaint olive oil (and beyond) shop we frequent on Main Street called Winter Hill.  Oh what joy! Another add-on to my quest of making specialty sandwiches at home.

On a brief historical note, the muffuletta is both a type of round sesame bread and a popular sandwich originating among Italian immigrants in New Orleans, Louisiana using the same bread. The muffuletta sandwich was created in 1906 at Central Grocery Co. on Decatur Street in New Orleans, LA, USA, by its owner Salvatore Lupo.[Wikipedia]

The signature olive salad consists of olives diced with the celery, cauliflower and carrot found in a jar of giardiniera, seasoned with oregano and garlic, covered in olive oil, and allowed to combine for at least 24 hours.[Wikipedia]

Without further ado, here is my homemade muffuletta spread and sandwich recipe!

INGREDIENTS:
(For the muffuletta spread-Olive Salad):

Other optional ingredients you can add onto the muffuletta spread are capers, chopped roasted red peppers, and sliced pepperoncini.  But, honestly, depending on how creative you want to be, the possibilities are endless!

NOTE:  You can use any similar variety of meats, as noted above.  For my recipe, I simply used one type, Bologna; alongside Parmesan shavings, sliced vine tomatoes, red onion, and romaine lettuce.  Himalayan pink salt, freshly ground black pepper, and oregano herb to taste. 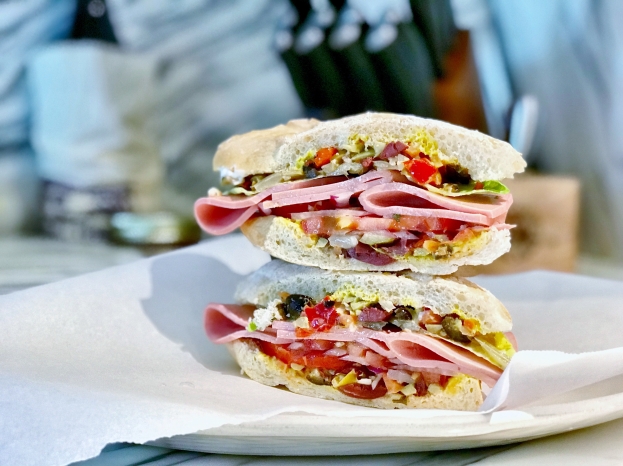 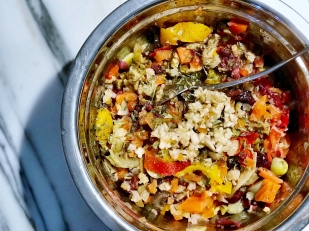 Hi! I'm Grace and I want to personally thank you for visiting my life's spontaneous moments shared through this website. Humbled by your support in what I do, I hope to continue sharing my passion for an agrarian, humane and sustainable lifestyle.

There was an error retrieving images from Instagram. An attempt will be remade in a few minutes.

Begin typing your search above and press return to search. Press Esc to cancel.